With Verde Adventure’s home base as the Verde River, we are humbled to recognize the value our amazing river plays in the daily life of millions of Arizonan’s.

With a nearly 200-mile long flow, the Verde is critical to wildlife, agriculture and recreation in Arizona – contributing nearly $2 billion to the state’s economy.  But the value of the Verde goes well beyond money.   As one of the last surviving rivers in Arizona that flows year-round, the Verde and it’s watershed feeds dozens of Arizona communities downstream.

While the value of the Verde can’t be understated, the Verde is in danger.  Since 1990, the Verde River and its tributaries have been declining in water flow.  It wasn’t that long ago in Arizona that river diversion, extreme groundwater pumping and general mismanagement dried up long stretches of the Santa Cruz, the Salt and Gila.

So, how can all of us help?  We believe that stewardship begins with appreciation and that is one of the main reasons we run our kayak adventures on the Verde River.  In addition to having your appreciation,  reviewing your own personal water usage, plants in your yard, advocating for the river and donating to Friends of The Verde River.  You can also sign up for our emails and join us on our annual river cleanups

So as we celebrate Arizona Water Awareness Month, the team at Sedona Adventure Tours thanks you for letting us share our passion with you. 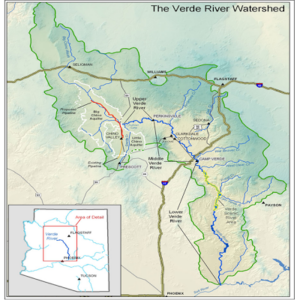